For the last 7 years our 3rd quarter seasonal release has been an “anniversary ale” in which we celebrate another year of “still being here.” I’m going to overuse “air quotes” in this paragraph. Just an “fyi.”  This year is no different, except we realized it was the brewery’s 10th year in “business.” While the Parker’s Grimm have owned the brewery for 8 years, the brewery itself was founded in late 2004 by Jim Quilter. So, how do we honor “this?”  Jim Quilter, rightfully so, gets daily recognition with Quilter’s Irish Death. We can’t top that. So, we decided to name the 10th Anniversary Ale, version 8, none other than… GARY.

We amused ourselves coming up with tag lines and headlines for this beer. And yes, if you think we went lowbrow with some of the phrasing, you’d be correct. I’ll let you use your imagination.

Anyhow, GARY most closely resembles an Imperial IPA. It’s about 7.994574% ABV and is heavily hopped with Simcoe, Chinook and Centennial, so you get that strong hop aroma and flavor without the lingering bitterness.

Below is a picture of the GARY label and below that is the press release, which really just summarizes what I just told you, but with real details as to when and where it might be available. 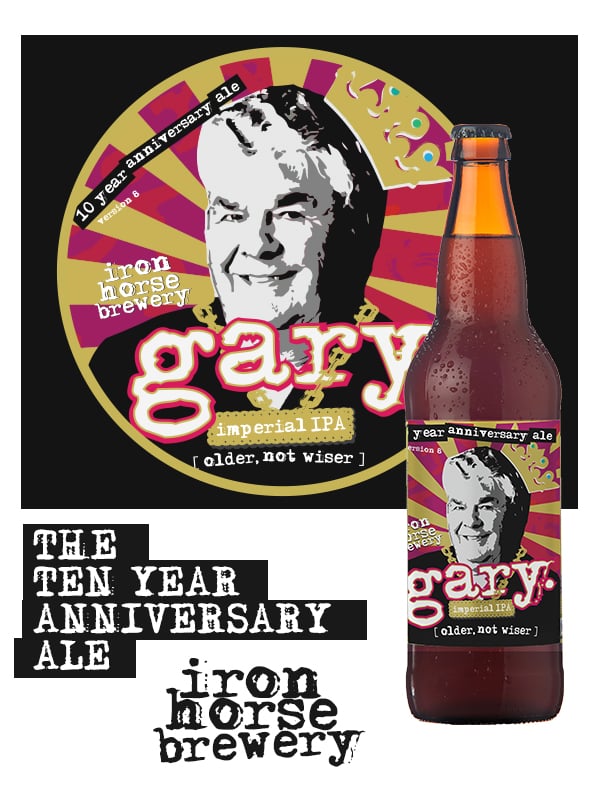 ELLENSBURG, WA (June , 2014) Iron Horse Brewery is set to release ‘GARY,’ an Imperial IPA created to celebrate its tenth anniversary as a brewery. As a culmination of 10 years of hard work, GARY is named after co-owner and Iron Horse Patriarch, Gary Parker. With the slogan “Older, Not Wiser,” GARY, the beer not the human, comes in at 7.99% ABV and is brewed with water, malt and hops.

“We have released an anniversary ale for the last seven years but this year, realizing it was Iron Horse Brewery’s 10th year in business, we skipped two years and decided we needed this to be our big, tenth anniversary release, ” said Owner, General Manager, and human Gary’s son, Greg Parker. “With ‘GARY’, the beer, not the human, we are honoring the fact that Iron Horse Brewery is concerned with taking risks, trying new things, and not being afraid to fail. We tend to do things that are counterintuitive and we’ll probably continue to operate that way. Gary, the human, embodies that, so we named the beer after him. Besides, its pretty awesome to be able to say: ‘I’ll have a pint of GARY,’ added Parker.

Release and Availability
GARY, the beer, will be available starting July 1st and will run through the end of September. GARY will be available in 22oz Bottles and on draught in select locations around the state. Gary, the human, will be doing an Iron Horse Brewery roadshow in Alaska during those months, selling the namesake beer. Also, the labels and tap stickers will have shiny gold foil on them, because that’s what makes things special, according to wikipedia.