I saw a posting the other day on one of the brewers forums where somebody was asking how much rice hulls to put in the mash to solve a slow runoff problem caused by mashing with pumpkins.  I thought to myself, “I know how to solve this problem.  Start with throwing the squash in the trash….”

Yep, it’s that time of year, when a group brewers mess up a magical beverage in the effort to make it taste like pumpkin pie.   Here’s an idea, make an actual pumpkin pie and enjoy eating it while drinking a wonderful fall ale, like a sweet stout, marzen, or that kind of thing.  How much better does that sound? Seriously though, have you ever smelled a pumpkin? Why would you want to make your beer smell like that? And let’s be honest you can’t put enough cinnamon sticks and cloves in it to cover up that odor. 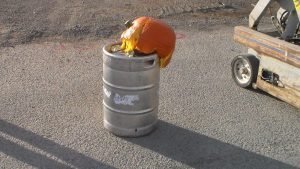 In a year when pumpkin spice has become a bit of a joke, with people wetting themselves because Starbucks pumpkin spice lattes are back, and everything that could be pumpkin spice, is (including but not limited to: Country crock, bagels, body fragrance, dog treats, Pringles, hummus, and a since debunked rumor about flavored condoms, which will probably end up getting made because of the excitement it created) and even those people are smart enough to not use actual pumpkin.  Let us, as brewers and beer drinkers, not be part of the joke.

I can already hear the arguments, ‘but it sells well’ or ‘it’s popular’.  Well the same argument can be made for making pale flavorless lagers but we as craft brewers have always bucked trends and popular opinions to create something different. So, leave the pumpkin beers for the large pseudo craft brewers (you know who you are) and do something that changes what people think.