Indie: cool short-hand for independent, right? Yes, and more. Indie implies a bit of a could-give-a-shit view of what is practical, popular and wise. Indie is a freedom of choice. The early punk rockers didn’t consult with their producer and record labels to determine what kind of music they should be making, they didn’t have producers and record labels, that’s why they did what they did. Once you have a label, you have to listen to the people running that label.

What was once the craft movement began as an indie movement. A bunch of rebellious goons who didn’t know any better got tired of the same old commodified garbage that the establishment was making and starting making their own stuff. It wasn’t about market research or long-term return on investment. The craft beer movement started as “what if you could make a beer that tasted like this, or that, or who knows what?” Turns out, there were a few beer drinkers out there that were wondering the same thing and they passionately followed. Then, just like with most movements, the early evangelists told everyone they knew about it.

As beer drinkers continued to convert to craft beer, craft breweries began to support their beer drinkers. Craft breweries know their customers and communities on a personal level and contribute to their causes, sponsor their amateur sports teams, donate to the local charities, make ridiculous beers that the one guy at the bar suggested.

Indie breweries innovate. We don’t have teams of analysts to tell us what beers to make based on market trends. We don’t have global marketing teams that ensure we optimize our dollars for maximal marketing return. You know what you get when you have those resources? Hop Hound Amber Wheat. You may not remember this little gem of a faux-craft beer but as the name implies it is A) Hoppy B) an Amber and C) also a wheat beer. Now, knowing what I know about the most popular styles at that time (hint: hoppy beers, ambers and wheat beers) I don’t have to make to far of an assumptive leap to know that some uninspired toolbag, or team of toolbags in this case who were likely identified as something like Trend Analysis and Innovation New-beers Team came to the executive department and said “here’s our idea, Hop Hound Amber Wheat. People love dogs, Amber ales, hops, and Wheat beers so we’ve decided to combine them all. We also think beer consumers are mentally children so the imagery will essentially be a cartoon dog with a fucking frisbee.” And in case you are wondering, the geniuses who brought us this fine beverage that can no longer be found also brought us the ‘take no out of your vocabulary’ campaign and also purchased Elysian Brewing, 10 Barrel and many, many more.

Granted, I’ve seen worse out of small craft brewers. For example, if i see another ‘blonde’ beer with a ‘blonde’ woman on it there is a possibility I will lose every last bit of faith that I have in humanity.  I’ve searched high and low for something more cliche and have only come up with equivalents.

But let’s get back to what’s great about an indie brewery, indie businesses, or punk bands. The indie approach to the pursuit of making a living isn’t beholden exclusively to the ‘maximize profits’ model. Iron Horse makes lots of terrible investments from a traditional ‘Return-On-Investment’ perspective. We donate to the wrong causes, partially for recognition but mostly because we are trying to make up for the guilt we still feel from stealing the matchbox car from preschool and getting away with it, we let our employees be free when it would be more profitable to grind them down to bloody stumps, we make beers that people hate, we make labels that people hate, I write lots of blogs that people hate, and most importantly we try things that are big stupid risks. It’s baked into the movement. It’s what starts movements. Do you think Fritz Maytag’s parents were like “you’re going to buy a broke-ass little brewery that makes weird beer? Hells yeah!! That seems way smarter than running our huge and successful appliance kingdom in 1965.” Maybe they did, I wasn’t even born then but even if they did I’m sure plenty of people thought he was an idiot for buying the brewery. But, what is the result of that foolish by most standards move? The birth of the craft movement.

So, I guess the question is this; does time march on, movements get co-opted and commoditized and it doesn’t matter because there will be another one right behind it? Or, is there value in attempting to force the movement to remain true; to innovate and remain independent to keep the support that started it. Or, is it no longer a movement since the revolution is over and now it’s just trading out players on the field?

One thing that can not be argued is what defines and what does not define indie. Indie is not corporate, it’s not large, it’s not driven by profits. Indie is independent, connected, risky and beholden to an ideology of doing it our way and driven by finding better and more interesting outcomes. Iron Horse is an indie beer maker and we hope that if you don’t support us you will at least support other indie beer makers.

So, what difference does it make? Why isn’t ‘craft beer’ or just ‘beer’ a good enough label for beer. For many it is and will be, if you are one of those people, why are you still reading this? For those of you that derive pleasure from supporting small, artisan driven, locally owned breweries, the term craft used to be all that was needed. That’s not the case any more. Craft has been and will continue to be co-opted by the major companies looking to take market share. Indie is our attempt to define our ilk in an updated and accurate way. Do you love Craft beer, regardless of producer? No worries, that term won’t stop meaning ‘not piss water.’ Do you want to keep your suppliers of tasty ale in the privately held company category, we encourage you to help us perpetuate the Indie label as a way of helping your ilk find what you desire. 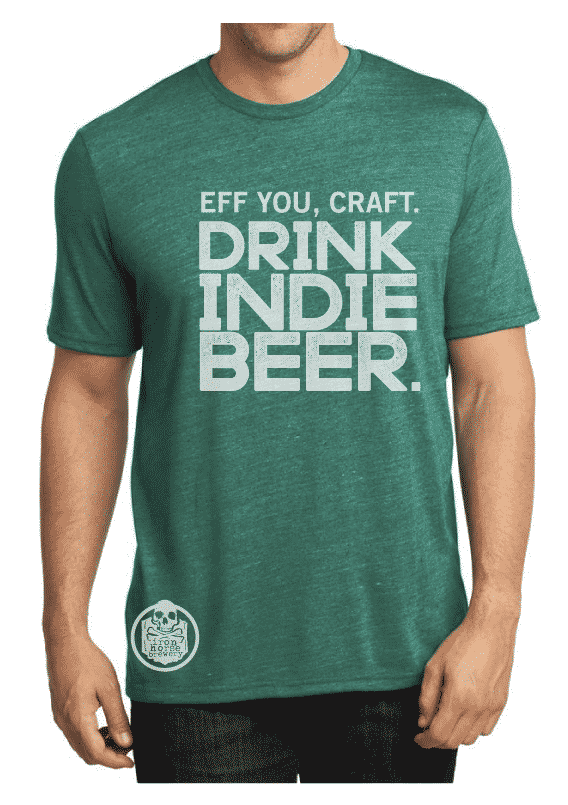 note: i’d be remiss if I didn’t acknowledge that “indie” is not a new idea. fortunately, there are some like minded, yet obviously independent thinkers out there.

In my day to day activities at the production facility at Iron Horse Brewery, there are 3 women

How To Say Goodbye At Work

Here at Iron Horse Brewery we’ve had our fair share of goodbyes. We live in a college town

Hungry For More Dive Bars? Feast Your Eyes On This!

Hungry For More Dive Bars? Feast Your Eyes On This! (22 Washington dive bars and what to order

The Meaning of Craft? | TheBeerProfessor

[…] more recently that the term was expounded upon in some detail.  In a provocatively titled piece, Craft is Dead, Drink Indie Beer, Greg Parker (Founder of Iron Horse Brewery in Ellenburg, WA) argues that the term indie, rather […]

[…] of the “magic” of indie craft beer is the deep commitment it has to building and fostering “community”. In allowing minors, we get […]