We like making beer. We experiment with ingredients, styles and wacky names. Some of our stuff has been well received, some of it hasn’t. When a beer seems to be popular we keep making it, when it’s not as popular we stop. That’s generally the way a business works in a free market.

Untappd and Beer Advocate are great tools for us to hear your constructive feedback. Sometimes a bad review is related to an expired shelf life or packaging mishap. Sometimes it’s just some shitty beer. Although we don’t ever produce a beer we think is shitty, we recognize that some stuff we’ve made has tasted better than others. The key word is constructive. “Too bitter,” “not balanced enough,” “doesn’t fit the description.” Those are constructive terms. “Super bad,” “hate this beer,” or “terrible” doesn’t help us get better. When we see those types of reviews we like to ask questions. Why was it terrible? Did you eat something funky before you drank it? These questions help us get better. Most people are nice but some aren’t. Below are some of the funnier interactions we’ve had with people on Untappd.

Actually wait, side-rant. Let’s talk about .25 star (bottle cap) reviews. Why is any beer ever getting that low of a review? 5 stars means someone else has to force you to stop drinking the stuff then .25 stars should mean you have to force yourself to drink the stuff. As in there is literally shit in the beer and it’s too disgusting for you to force down. I’ve tried quite a few brews and I’ve had plenty of beer I didn’t like or let someone else finish. But I’ve never given a .25 star review on Untappd because I’ve never experienced a beer that I physically couldn’t drink.

Anywho, back to some of our favorite bad reviews. Not much is needed to explain other than screenshots of the conversations we’ve had via Untappd.

apparently he was being extremely sarcastic in his written review because he gave us 5 stars.

JK he hated it.

sometimes we ask for more details and get ignored.

neither turning 50 nor double rainbow sucks. we strongly disagree with your statement. 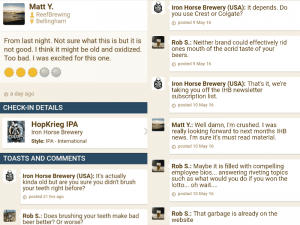 we were TRYING to have a conversation with Matt Y but then Rob S came in from out of nowhere.

we worked it out with Rob S.

don’t blame us if you can’t handle the funk.

on some days we just aren’t in the mood to deal with the critique.

what’s great is when people give us a bad review because they don’t like the style or think it’s the wrong time of the year to drink ______ beer.

you’d be surprised at how often people say “i hate this style.” ummmm then don’t drink it?

When it’s all said and done, we love your feedback, positive or negative. It’s vital to our success. And rest assured, almost all comments are read and taken into consideration.

2 comments on “Shut Up and Drink” Add Your Comment