There’s a new, special, fancy, unique, one-of-a-kind beer available at [ the pub ] and this is how it came to be.

Three years ago, former IHB Brewer Paul Baker came to me and said, “Hey, I got this barrel that we should put some stuff in.”

Well the barrel was a total piece of shit, so somebody made it into a planter.

I told Paul “Hey, you should find another barrel,” and he did. 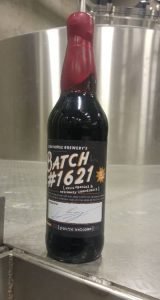 This one was not a dried up hunk of wood jerky. So we took beer fermented with some house yeast, placed said beer in the non-shitty barrel that had contained port wine in it’s previous life, pitched a blend of lambic cultures, primed (added sugar content) with some unfermented Irish Death and waited. Twelve to eighteen months later after sampling monthly it was decided to be done in the barrel, probably because we were tired of waiting, but really it was enough oak taste. We moved the liquid into stainless vessels to finish. We started blending trials and forming a plan but then Paul moved on and we kinda forgot about it. After 12 months in the stainless vessels, my mom wanted to give me a bunch of sour cherries, so former IHB Brewer Elliot moved the beer to our pilot fermenter and added the cherries. We waited another six to eight months and due to us selling our pilot system, and it tasting delicious, we had to get it out of the fermenter.  We kegged it and I was resigned to it going out on draft to [ the pub ] but Jake and new Paul thought they would like to hand bottle it.  So here we are.  Hand bottled, hand labeled, hand waxed, and autographed by members of the production crew.

Because we used a dark base and multiple grains, this will differ greatly from a standard kriek. We will never make this beer again. It’s available at [ the pub ] for $18.89.