Three years ago, we decided we weren’t occupied enough with other St. Paddy Day activities, so we added the .5K Race in Ellensburg. In its first year, about 230 participants showed up and we collectively raised $2800 for FISH food bank. Honestly, I would have been satisfied with 100 people and the $1000 goal. However, based on the surprising turnout, we decided to aim a little higher for the next year.

What. is. happening? I don’t know, but you weirdos are amazing.

Fast forward to eight months ago, when I proposed the idea to our stellar marketing team, that we take this race concept to Boise (pronounced Boy-Cee) in 2017.

Fortunately, Nicole, Adam, and Connie are very, very good at taking ideas and translating them into action and so we hosted two .5K races this year.

Ellensburg was successful on all accounts, from the witty banter between Greg and Ross, to all the jerky you could eat, to the rain holding off just in time.
Boise was a fun but challenging race to execute on; However, it did highlight some very important elements, which leads me to the five takeaways.

1. if you are going to put on a race in a remote city, having kick ass partners is pretty critical. Fortunately, Wise Guy Pizza Pie made it vert easy to host the event in their space. The Boise Downtown Association was pretty helpful out of the gate.
2. having a small turnout, does not mean it inhibits maximum fun. the attendees, sponsors, band all seemed to really enjoy themselves, and most importantly we raised $1600 for the Idaho Food bank.
3. always do things twice; so next year I believe the Boise race will grow and we’ll raise even more money for the food bank. But we’ll need your help to do it.
4. Speaking of money. This year the two races raised $7,130. If you add that to the prior two years, that totals $14,949. Guys, that is 15k for a total of 1.2miles of racing. That is $12,500 per mile raised. That’s how we should measure this right? The real takeaway, though, is that these food banks have greater buying power than we do, so every $1.00 in cash can equal up to $1.50 in food.
5. I think we can go bigger in Ellensburg, especially since St.Patrick’s Day is on a Saturday next year. Should we add a couple of bands, try to shut down main street, have a beer garden outside, maybe elephant rides, and just go for it as Paddy On mini-festival? If so, click here to sign the petition supporting this ridiculousness. Admittedly, it’s pretty unlikely to happen in this way, but I’m a big fan of trying and failing hard. Just putting this out there, but, wouldn’t it be great to raise $10,000 for the food bank, by just having a bunch of heel clicking fun?

Lastly, here is a shareable infographic that you might not care about, but it was fun and pretty to look at.

Thanks again to all who participated and helped in any way, big or small. Without you, I would probably be out of job and working on a hand modeling career. 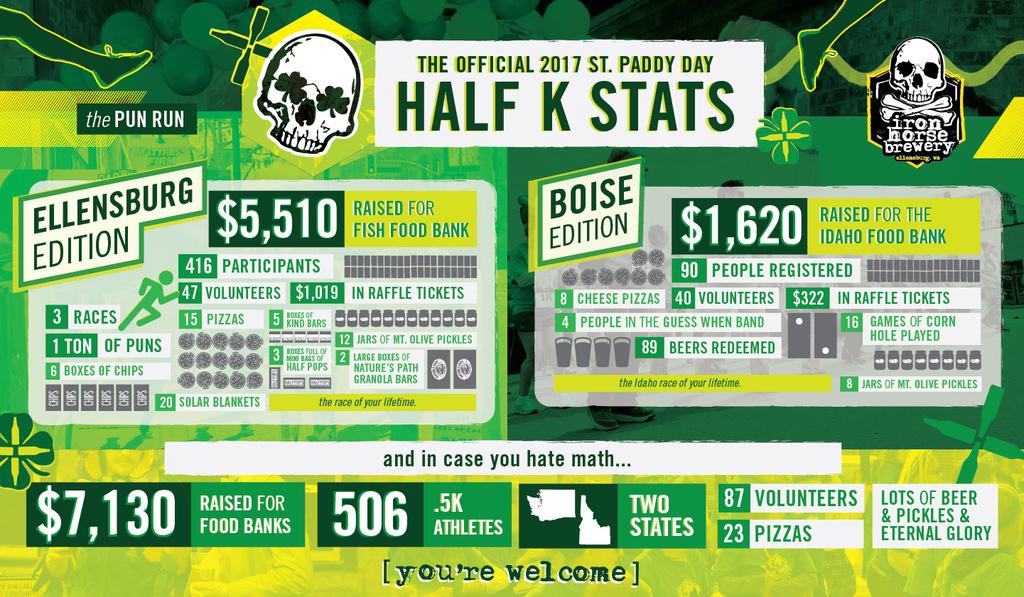