Ahh, trolling.  My favorite past time when I’ve just woken up.  I would say 98% of my time awake is spent in a good mood for a variety of reasons that we don’t need to delve into.  The other 2% is the ten minutes or so after my eyes open and I grab my phone to digest the inanity of social media.  I’m the definition of a people person and genuinely enjoy/need the company of others, but for some reason I’m a complete ass when I wake up.  Friends and family know to either stay away or to use this as an opportunity to poke and prod me into lashing out.  It’s not a smart life plan to focus this negative energy on my wife or daughter since I really like having a family.  Lucky for the three of us, we (and humanity in general) have received the greatest gift ever created by humans outside of the wheel and the ability to make fire, namely the internet.  Here’s an old example, but a good one 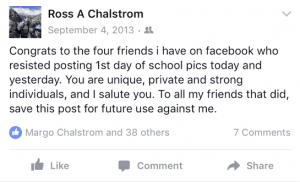 I can’t describe how much joy I felt as comments and direct messages rolled in informing me that I was stupid, misguided, or just didn’t understand.  Even better I’ve been getting trolled ever since by friends who post their kids’ stupid pictures to my wall every year.  I will note, that to date, I have never received an explanation that holds any water as to why these pictures aren’t just shared with family and real life friends instead of the public at large.  That being said, please send me your reasoning if you actually have something valid.  We could spend some time figuring out why this sort of debate makes me feel good, but let’s just chalk it up to a deep seated personality defect.

So why am I bringing up my trolling hobby?  Well, as you may have heard, the Eastern Washington Brewfest is happening this Friday.  Every year we have shirts made to commemorate the event. 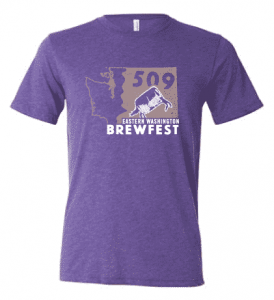 This year the background color chosen was purple with some beige and white screen printing overlaid.  Well, the beige color came out kinda looking like gold.  Now take into account the fact that outside of the CWU Wildcat bubble, we are smack dab in the thick of WSU Cougar country.  At the brewery, of the people who care about sports, I believe there are only a couple of us who root for the UW Huskies, with the large majority being Coug fans.  When I saw the shirt with my own eyes, I immediately giggled and thought of two of our bigger Cougs, Jake and Dane.  The mere thought of those two wearing a beautiful purple and gold shirt is almost too much to explain.  The fact that this was not Brooke’s intention doesn’t lessen all of my feels.  I was also informed that one of the two would not be wearing the shirt on Friday, even though he is emceeing the event.  This cannot be allowed to stand.  My request to all ten of you that read this and will be attending, please ask him why he isn’t wearing the shirt?  Isn’t wearing a symbol of Eastern Washington brewing unity more important than misplaced feelings of anger toward a wonderful university and its football program? Rest assured your actions and resultant hero status will be sung from the mountain tops by yours truly.

Before I leave I’d like to share a couple of possible trolling options and tips for those with a healthy dose of schadenfreude who are trying to become more effective trolls.