We have resolved the issue with the other PNW brewery; they will continue with their product until the end of the year – allowing them to recoup expenses, and perhaps, more importantly not throw away perfectly good, independent beer.

But first, let’s flashback to October 9, 2017. I was sitting in the trailer department, working on some material for the 2018 brand guide, specifically a not-fully named new beer that was going to be a pale ale intended to satiate the liquid desires of outdoor-minded people and those who just love the aroma of hops, when it occurred to me that there is a near perfect name already out in the zeitgeist.

It was a name that represented the irreverent, just-go-for-it attitude that we, at Iron Horse Brewery, try to honor on a daily basis.


That name was Send It.

But this was too obvious. There was no way the ™ wasn’t taken by another brewery.  (Naming things is hard, naming things in the craft beer industry is getting virtually impossible) [here’s an article]

So I did what we typically do: I went hunting to see if the word mark already existed using TESS.  No, not that TESS, but the Trademark Electronic Search System.

To my surprise, Send It didn’t have a ™ attached to it in the beer/wine/spirits category. What? The What?

A cursory glance at various beer rating sites showed little results that might nullify an ITU (intent to use).  Umm, it looks like we can actually move this idea forward.

I quickly had a chat with the rest of marketing, our favorite redhead, Dane and CBTMRO, Greg about the idea.

We all agreed.  Let’s, ahem…Send It. Sorry, I couldn’t resist.   So our amazing vector design architect Vanessa was tasked with coming up with some renderings of the brand identity.  As a marketing department, we put together some concepts and initial ideas for how to launch the brand. Alfred E. Newman (Dane) assembled a go-to-market activation plan along the way. 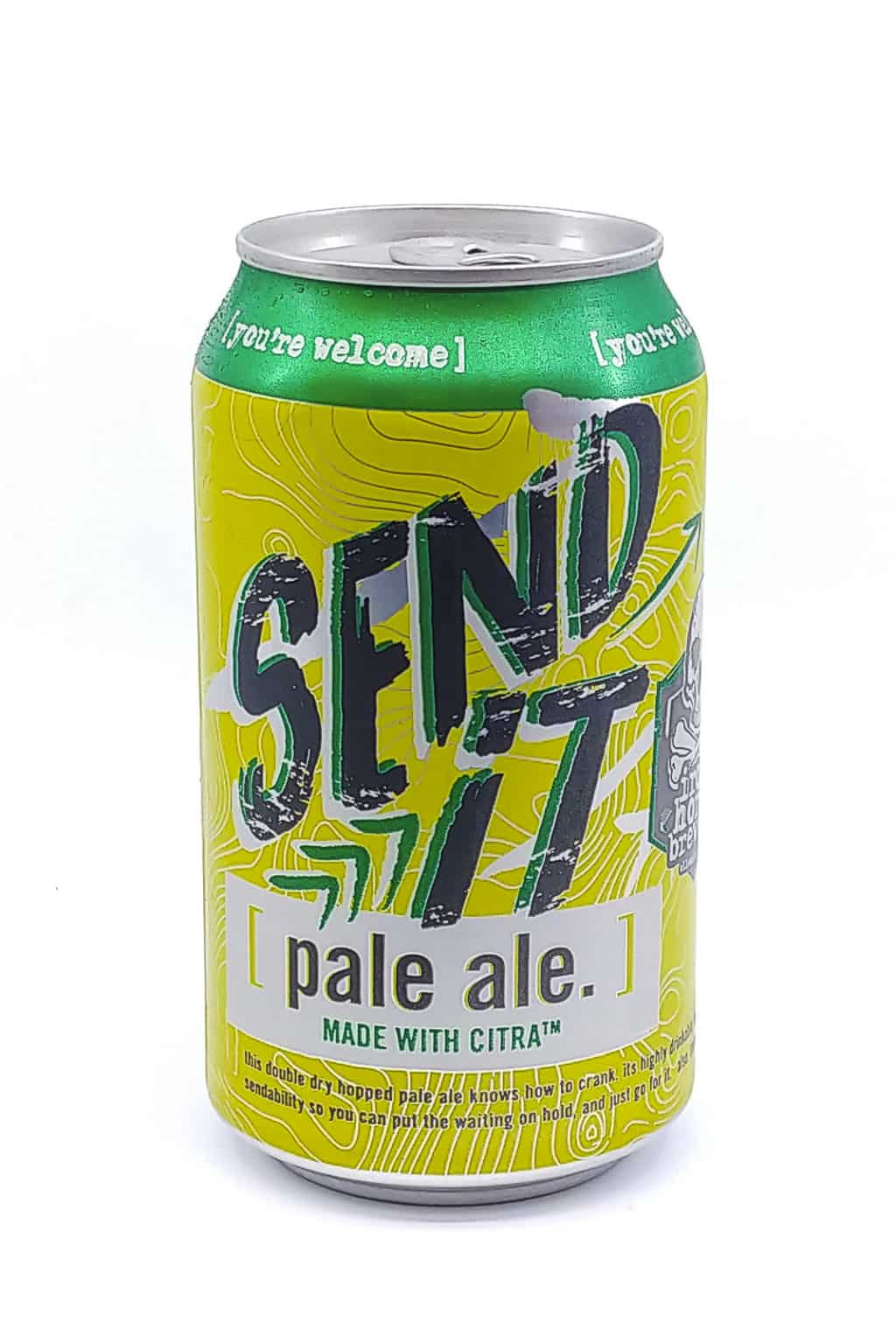 “You know,” I thought to myself while eating bugles off of my fingers  “now is probably a good time to file our Intent To Use for Send It and Send It Pale Ale”.  I did another mark search again before contacting our ™ attorney.

October 11, 2017.  Lenny Boy Brewing Co. from North Carolina was granted an ITU for Send It.

Double shit.  I’m. an. idiot.  Why didn’t we file this immediately?  Stupid Send It mentality.

After overcoming the feeling of dread, we decided that our best course of action was to reach out to Lenny Boy directly and see if we can work something out. After all, they were on the east coast, we are in the PNW.  Maybe it will work?

Here was an email I sent to Townes,  the owner of Lenny Boy Brewing.

Thanks for following up. We have a brand that we started prepping at the beginning of October, the 9th to be exact, called Send It Pale Ale. However, it looks like your company filed an intent to use almost immediately after we checked the registry. So I only found out about this last week. Great minds think alike! Anyhow, we would like to continue with the brand, but obviously must and desire to be sensitive to your TM application. Are you free to talk on the phone to walk through this a bit more?

Thanks for your time.

Besides the fact that I sign my emails with a “cheers”, which is worthy of mockery, this email resulted in Greg and I having a phone conversation with Townes from Lenny Boy a few weeks later. If I recall, the conversation went something like this.

Townes: Hello.
Greg: Hey Townes! This is Gregory Parker, of the Silverdale Parkers.
Townes: Hi Gregory of Silverdale.
Jared: Hi Townes. Jared Vallejo here. Thanks for meeting with us. How’s the weather over there?Side note: why do we always ask about the weather in introductory meetings? Next time, I’m going to ask what’s the worst movie you ever saw or if you are a fan of bugles.

Townes: Hey Jared. Thanks for your super respectful and kind email.
Jared: My pleasure.

Townes: So you boys want to Send It out there, huh?

Greg: Haha. Yeah, we obviously missed your ITU, but we believe in respecting the trademarks of our brewery brothers and sisters, so we wanted to see if we could find a solution where Iron Horse can use the Send It name in the Pacific Northwest.

Townes: I get it. We’d have to formalize things with our lawyers, but what about you guys just running out your fixed inventory and then sunsetting the brand after it’s done.

Jared: Thanks for understanding and we don’t want to be greedy, but what if the brand takes off? Can we talk about a licensing agreement for potential ongoing use?

Townes: I’m sure we can have a discussion.

Greg: Townes, you are so cool and probably incredibly talented. Why don’t we take on the expense of having our lawyer draft something up for your guys to review? We realize that we have more to gain, so most of the cost should be our burden.

There was more to the conversation, but to spare your eyes from our witty conversation I condensed things.

Over the next few months,  Greg and Townes gleefully bantered back and forth to negotiate terms. In the meantime, we had a verbal agreement in place to use the Send It brand while contract terms were clarified.

Meanwhile, we noticed another PNW brewery was launching a brand by the same name around the same time as Iron Horse Brewery. This came to our attention around January. At that time, we felt it was best to do nothing until our deal with Lenny Boy was more solid, as our ability to keep Send It in the market was dependent on finalizing this arrangement.

Right around the last round of contract drafts (mid-March), our beloved GM and Owner, Greg sent an email to this PNW brewery which went more or less like this:

hi.
can you connect me with whoever handles trademark business for your brewery? we’ve got some things to discuss.

Facebook message, hey, can you have whoever is in charge of trademark stuff get ahold of me? i left a voicemail and sent an email to the info@ email but haven’t gotten a response.

Okay, so back to the contract with our friends at Lenny Boy.

Surprisingly, we received a cease and desist from the other Send It pnw brewery April 16th.

I should note, we are deliberately not naming this brewery because we don’t believe it’s in anyone’s best interest to call things out at this point. And in the spirit of cooperation and being amicable, it doesn’t seem necessary.  (I assume no one uses Google and the Internet stopped working entirely)

Despite our initial desire of wanting to cross out our name and replace it with theirs, along with some references to our agreement with Lenny Boy and just send the cease and desist letter back to them, we decided against it. Greg did send an email to the response that we finally did get  “looks like you want the conversation to go through the attorneys. cheerio”

So that’s currently where things stand on that front. Lawyers.

You might be asking yourself, why write this at all then Iron Horse? Fair question.

Initially, I thought it was important to tell the story of how waiting can have consequences; how when an opportunity is there, you should take it aka Send It, because Waiting Can Wait. However, as the story unfolded, I realized the more important takeaway is how cooperation within the industry is always a better approach, even if the outcome is not what you hoped for. We knew we missed an opportunity. Kudos to Lenny Boy for protecting themselves and conducting smart business practices. We also believe that transparency helps hold us accountable, even if this can be perceived as a slight CYA. These types of disagreements are frustrating and we wish to avoid them, but we think it is good for people to know what goes on to arrive at a cease and desist letter.

Sometimes following the process doesn’t always work out, but in the case of Lenny Boy, it did for us thanks to their willingness and inherent spirit of cooperation.

So, that’s the where everything stands as of this post.   Send It is in the market, we have some socks to go along with it if you are interested in keeping your feet warm.  You’ll be seeing and hopefully drinking it in a bar or at an outdoor event near you.

In case it helps and you thought this post couldn’t be any longer, here’s our interpretation of what Send It means.

Going For it. Slam through it. All in. Balls to the wall. Fuck It. Send it. They’re not just words. They’re a lifestyle. And it’s calling you.You want to hit the slopes with your friends and take that big jump you’ve been eyeing? Sure it’s three times anything you’ve ever done before and your odds of landing it are slimmer than your favorite meat stick. Send It.

You want to quit college to become a brewer for an indie beer company even though you know you’re going to be working all the nights and weekends in the foreseeable future and might only get paid in beer? Send It.

How about attempting a marathon without real training? Send It. Instead of thinking “what if…” just go for it. Catch that wave. Get that tattoo. Chase a f*#^ing tornado.

Send It is for the beer drinker who is living their life one bold move at a time. They jump, fall down, then get up and go harder because they enjoy the rush. They don’t have a bucket list because they’re doing what they want right now. Because waiting can wait.

The liquid is a pale ale that also knows how to crank. At 5.25% ABV, it’s a highly drinkable, middle-tier abv beer with moderate hop intensity but full sendability. This beer is made with Citra (™) and Comet hops and has 37 IBU. We recommend pairing it with being rad and your best friend, Jerry.

What are you waiting for?

Send It, cause Waiting Can Wait.