Is cooking with beer still a thing? That’s a question some of our cousins tackled on Episode 28 of the Life Behind Beer podcast recently. And it was great that they talked about it because I had been planning to try cooking with beer or specifically baking with beer, so it was kismet.

I had never tried baking with beer until last weekend, and I learned when you’re baking with beer, most of the beer is actually consumed during the process because the recipes generally call for very little beer.

TBH I had a couple failed batches that I didn’t even think were worth sharing with the cousins, so we will just skip right on past those and not even talk about them anymore. It wasn’t all pinterest fails though.

In case you didn’t know, Mocha Death is best paired with breakfast, and is also an acceptable substitute for breakfast. So naturally, it got me thinking about making mocha death scones. Of course when you think of mocha death the words chocolatey and rich also come to mind, so I had to go with some brownies.

The obvious winner was the mocha death brownies which really only incorporated the beer into the glaze, but when you have a winner you don’t question it. We’ll start with the brownies first so you can just get to baking something your friends will drool over.

In case you are wondering about the recipes, I adapted the brownie recipe from my favorite food blogger, molly yeh. I fangirled so hard when she signed my cookbook and mailed it back to me. The mocha scloaf is modified from life, food and beer, which was a random internet find that did not steer me wrong. Of course the scloaf twist was another sneaky move by molly.

Now to the fun part. 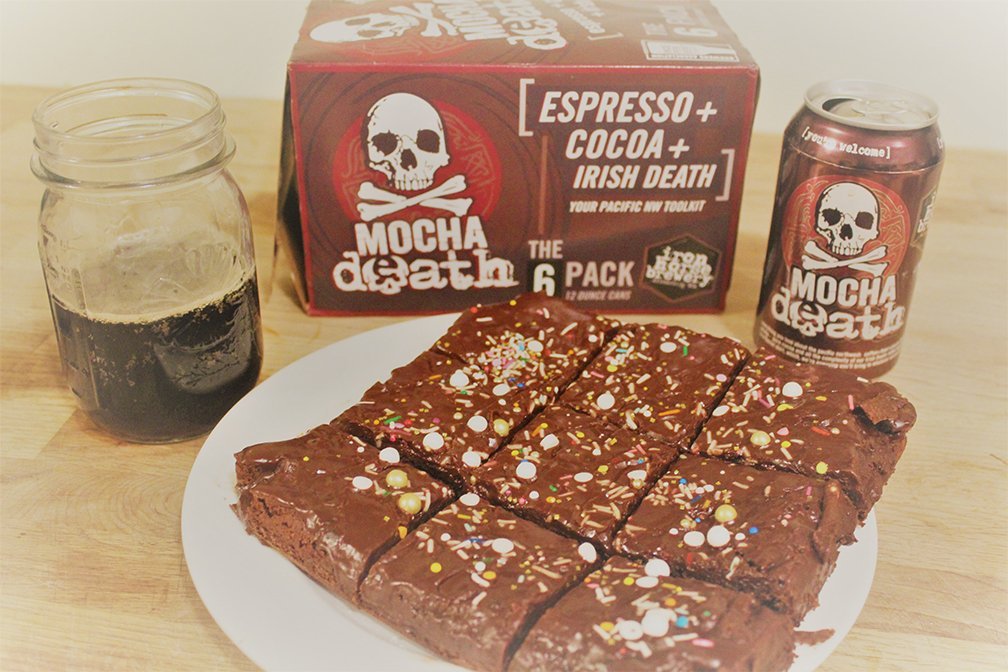 A second recipe that I would make slightly differently if I do it again is a mocha death scloaf (scone loaf because making perfect geometric shapes is hard). In my version I did not add banana, however after tasting it I think it could’ve used a bit more flavor, so I’m telling you to add it in. If not banana maybe some shredded coconut or your other favorite dried fruit. But not raisins. Nobody wants to find a raisin in their scloaf. I didn’t put a mocha death glaze on this but it would probably have tasted just as good as it did on the brownies so you should probably go for that.

Now tell me, what recipes have you made with mocha death? Do you cook with beer?

BONUS: Wow, if you truly read all the way to the bottom of this recipe post, you deserve a bonus. Show us how much you love mocha death for breakfast. Take a picture of a mocha can and your breakfast. Submit it to Instagram, Twitter or Facebook with the hashtag #mochadeathbfast to be entered to win a branded stainless steel mug. Must have a public profile for us to see your entry. Or join in the larger mocha death kegerator giveaway by visiting www.mochadeath.com.

Goodbye [ the pub ], Hello [ Something Else Entirely ]

Or a blog post about the future state of iron horse brewery tasting room experiences. TL;DR [ the

3 answers to our favorite question: “How can I get Iron Horse Brewery beer where I am?”

Many breweries have people who enjoy their beer. Some express that enjoyment by describing themselves as a fan.