Part of being a responsible business is being an environmental steward. When Eric Welsh of River Farm Worms approached Iron Horse Brewery about collecting food waste from [ the pub ] for one month to see if it could save us money on our trash bill while also helping him get his new compost business off the ground we said of course. We’re all for helping the environment.

Over at [ the pub ] we now have food waste bins in the kitchen and a bin by the bar in the front. Anything that’s not meat or dairy can go in the compost bin. Napkins? They can go in the bin. Food scraps from that salad you didn’t finish? Yup, that goes in too. Those cute little cardboard containers that hold your nutritional yeast covered popcorn? Yup.

Eric collects from our bins once a week, brings the food waste to his farm, and puts it all in a big pile of compost to let the process begin. The pile gets to about 150 degrees all by itself from decomposition, Eric says. He then breaks up the pile and feeds it to his worms so they can turn it into fertilizer.

“The worms eat pretty much anything,” he says. “They eat their body weight a day under ideal conditions.” 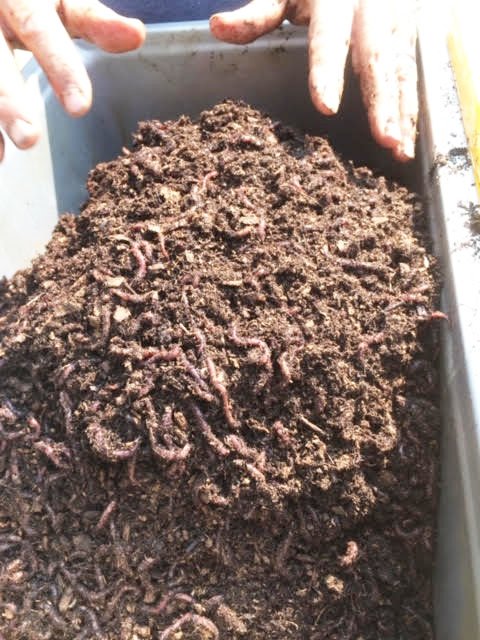 Eric has about 150 pounds of worms that work to turn anything carbon based into fertilizer. For years he’s been using chickens and pigs to produce fertilizer for his farm, but it’s never quite enough so they had to also import fertilizer product from Oregon. Now, using local waste, he will be able to make all the fertilizer his farm needs plus some. He is currently producing two cubic yards of worm compost a month.

So now you know one of our secrets. Eric at River Worm Farms is willing to take your food scraps for a small fee and turn them into something the environment can use. He plans to add  other local restaurants, and hopes to eventually move into residential compost.  You might also see him selling plant starts and worm castings (fertilizer) this coming spring at the Kittitas County Farmer’s Market. Worm castings help add microbiotics to soil and also help repel pests like aphids.

“It’s great for our small farms, but on a bigger scale I think it could impact the community too,” Eric says.