America. The beer by AB-Inbev.

America. The beer by AB-Inbev.

Bahahahahaha!  Are you serious AB-Inbev, the Brazilian managed Belgian brewer? America. Please tell me in what way your product is worthy of being labeled America? Please tell me how in any way you embody what is great about America or even what is unique about America.

I doubt that you can or more likely that you will even try since that isn’t the point of this name change. “America beer” is a cheap marketing gimmick aimed at stoking patriotism filled with a cheaper lager aimed at filling guts with the least interesting flavors this side of tofu. In fact, America beer is probably made with tofu, which in my opinion might be one of the least American foods in existence. Yes.Tofu, socialism and censorship are the key ingredients in America beer. To a lesser extent, ingredients include the obligation to turn over your weapons, mandatory mass transit, 30 hour work weeks, no cheese on that burger, feeble little animals that aren’t predators, and communism. Notable exceptions to AB-Inbev’s America beer are due process, freedom of the press and democracy.

If you aren’t disgusted by this, then you aren’t American, er, a United States Citizen since technically Canadians, Mexicans and really all North, Central and South Americans live in the Americas and could therefore be called Americans.

Hmm, now that I’ve thought about that perhaps this beer is aimed at the Americas and that ingredient list might work pretty well for a few of those markets. Here’s to Venezuela!!! 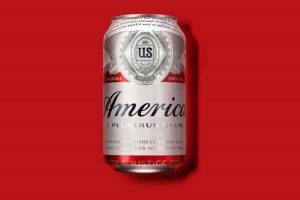 Agree with everything except it’s generally accepted worldwide that people of the United States are called “Americans.” It’s OK to do so and nobody will get confused or offended.

So when is Iron Horse going to produce a tasteless lager so bad and bland that it is mistaken for lightly colored carbonated water? Think about the mass profits Iron Horse could make by using 4th rate hops and free lightly recycled water from the Ellensburg sewer district. All you’d have to do is give it a patriotic title, such as “Vote for Chaunchy” and wrap the horse in the American Flag. You’d make untold millions so you could buy up other craft breweries and force them to produce and sell bad cheap beer wrapped up in the red, white, and blue.

Oh wait, I forgot, you have a conscience, unlike the guys at InBEV. Never mind.

Budweiser is not imported. It is still brewed 100% right here in America between the 12 local breweries, and has ALWAYS been produced in the U.S. since its inception in 1876. And Iron horse is also not imported, and is also produced right here in the USA. However, it is distributed on trucks that say Budweiser, and sold by salesman that are paid by Budweiser. Maybe one day iron horse will be able to afford there own warehouse, semi trucks, drivers, and salesman to distribute there own beer…but until then they will have to rely on the funding of macro “American” beer to get there own beer out there. Quit hating and show some love.

sir, you are factually correct in many of your statements. Bud is not imported, it is still brewed in the U.S.A. i assure you, if it were more profitable to brew it overseas that process would have already been completed, but since beer is mostly water and therefore extremely heavy, most of the beer we drink in the states is brewed here including major ‘imports’ such as Foster’s and Beck’s. basic business economics at play. Budweiser consumed off of this continent is probably not brewed in the states for the same reason but i’m too lazy to fact check that so there you go.

the trucks that say Budweiser are not paid for (except in the case of ABInbev owned wholesalers which are still rather uncommon, not because ABInbev is not interested in the distribution tier of the 3 tier system but because in most cases state law prohibits it). ABI pays to have those truck wrapped in their graphics, but that is where the financial contribution to the trucks stop. the salespeople are also not paid by ABI, except in the case of incremental bonuses earned explicitly by executing on ABI sales goals, of which not a single brewer that is independently owned is a part of.

the salespeople and trucks are paid for by the local business owners, commonly referred to as Wholesalers, who own the distribution rights for the ABI brands in a particular territory. the owners of these businesses are beer wholesalers. they sell my beers, ABI beers and many others. in the case of ABI owned wholesalers, such as in Seattle, there are no independent brands that they sell. they once did and for some reason or another every single brewer that was sold by K&L Distributor before being acquired have left that distributor. would you like to venture a guess as to why? I will not dispute that AB developed one of the greatest distribution networks known to man but it was not some benevolent act that i am now freeriding on. it was a smart business move funded by the consumers of this great nation who drank massive amounts of Budweiser. I don’t hate ABI. I dislike pure profit motives. As a publicly held company, such as ABInbev it is your absolute duty to deliver the highest returns to shareholders. There is no allowance for acts of kindness, investments of heart or anything else that is not directly contributing to greater earnings per share.

I love our Wholesalers who sell ABI products. they are well organized, efficient, effective and great people. they are operated by community members who will make ‘poor’ investments in local causes because they are driven by profits as well as heart and a sense of community. i also feel that way about our wholesalers who represent the MillerCoors products.

you want to know who else doesn’t like ABInbev in many cases but don’t have the safety of saying it? ABInbev wholesalers. Want to know where there is a lot of profit in beer? The wholesaler level, hence ABI’s acquisition of key markets such as Boston, Canton, Denver, Eugene, L.A., Louisville, NY, Oahu, Oklahoma City, Pomona, Riverside, San Diego, and Tulsa. ABInbev’s drive for profits puts them at odds with their own network. They have attempted to erode the protections of the 3 tier system, bullied wholesalers into not selling non-ABI beers by holding back financial incentives and freezing their ability to purchase additional territories. ABI has incredibly onerous and forceful tools that it uses to coerce the wholesalers to meet their obligations and reduce their share of non-ABI brands.

i can’t stress enough that this is not a situation in which i am a freeloading entitled baby. i have benefited from AB’s organizational tools but were they MillerCoors’ or some other organization favored by history it would have been a different network. ABI is not special and is not deserving of any reverence. in fact, they now currently represent the greatest threat to craft brewers and independently owned wholesalers in my opinion.

and from a previous post here is my opinion on that future.

“If you think I am an idealist dipshit and your ideal future makes no differentiation between total mega-corporate control of all our markets or locally owned and operated stakeholders, then we have a very different perspective. I’m not ready to yield my world to ‘efficiencies’, ‘market share growth’, ‘standardization’ and all the other things we’ve been told are so great about the free market and consolidation. I like diversity. I like paying a cobbler to repair my shoe, even though I could get a new pair for the same money. I like getting a loaf of bread from the person who baked it, start to finish. I’m not ready for Idiocracy.”

assuming you feel i may have a point, i will direct you to a previous post that goes into greater depth on the threats to indie beer. https://www.ironhorsebrewery.com/2015/11/in-the-name-of-craft-beer-sabotage-the-sell-outs/

in summary, i am really glad you commented. i need to be questioned, as does anyone, it is a source of civic growth and evolution. perhaps you will have more to say in response to this. thanks for taking the time.