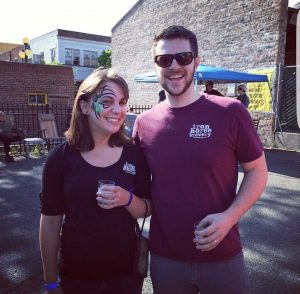 I like to think of myself as an enthusiastic person. If I really like something, I will get it tattooed on myself, go on themed vacations, pursue certifications in the quest for knowledge, you name it. You may have seen my other blogs, where I commonly speak of my pets, my passions, or my addictions. Today, I’m going to get personal, and fill you in on convincing my husband to join me in my “late twenties crisis” job-turned-career, and the first couple of months of working with him here at IHB.

Iron Horse employees call themselves cousins, for very good reason. Often they began as friends before the brewery, watch pets for each other during vacations, some become roommates, others re-home some pets, often they fix cars together, and very often they enjoy drinking beers together. Occasionally you see them pair off on a date or two, spouses helping out at festivals, and you may even see other family members join the brewery officially. I had been joking with Paul for years that when the time comes and we need an internal financial controller, it obviously had to be him. This was all coming from a very selfish place because I didn’t like the hours he put in as a CPA during tax season. Lo and behold, this spring Greg wanted a controller, was willing to consider Paul’s resume, interviewed him, (with many other cousins weighing in to ensure a good fit, and an avoidance of extreme nepotism on my behalf) and eventually decided to hire him. Freaking awesome! That earned Greg what I believe is his first ever Rikki-Hug (or, dare I say, HuffleHug).

Here’s my top 4 favorite reasons why I love having Paul around at the office:

The hubs and I commute together to work usually about 3 days a week. Granted, the new commute is less than a mile (which is far too short for driving, I will be honest) but that saves a metric buttload of gas over our previous commutes (he had a 39 mile commute TO work). During those two and a half blocks, we can chat, encourage each other, plan our day’s attack, and enjoy all the rad tunes on the Siris XM Fly station.

We have had more lunches together in the past 6 weeks than the last probably 3 years. Minor exaggeration, sure, but when you marry a Certified Public Accountant, well, you aren’t guaranteed much time together January through April. Who knew bonding over our separate tupperware packed salads would be so enjoyable?

Reason 3- He finally gets it.

You may say the fart jokes and bristol stool scale conversations are a norm in the office, but until he walks into a group youtube deep dive on champion flatulence artists, he just may think you are exaggerating. No dear, I am certain that there is an ionizer that gets passed from office to office to lessen the smells that these people commit.

So, there are some legitimate concerns working with your spouse. Experts say to avoid mixing business with pleasure for a reason. Here’s how we have tackled things so far. Please note, I am not an expert, but since this is my second job with this guy, and we still are married, here’s what worked for us.

First thing first, a general rule of thumb for all jobs is to “Leave your shit at the door.” In other words- leave your drama for home. The company isn’t paying you to be a dick to other people because you are having a bad day.

But, say one morning you have coffee balanced on your iPad, you’re not too awake because mornings are the gosh darn worst, and your kitten is successfully eating your ankle in a very claw heavy manner. There may be a small chance you spill said coffee all over your white and yellow rug, the kitten, as well as the white carpet of your living room. Now, I’m no expert, but maybe your patient hubs isn’t quite as patient as usual and non-productive words occur between the two of you with a feeling of resentment spilling over into the workplace. On that occasion, your author suggests to the offending spouse (aka the spilling spouse) that thanking the spouse who was so kind to clean your mess, and then maybe regaling your story of ineptitude and appreciation of the kind spouse to an audience of coworkers may help ease the tension.

Bickering- aka. ” We are not fighting”, but we are definitely not agreeing.

We bicker fairly often. And we can quibble over some really random things. But, when you realize you are bickering in front of an audience, admit it, laugh, and let the audience moonwalk out of the conversation without trying to draw them in on who is right and who is definitely crazy for washing their car that much.

I enjoy telling my hubs about most aspects of the day, hottest who is dating who gossip, complaints about some interactions, future beer plans, why some new item forms are lame for grocery chains, etc. But, now that he also has a vested interest, it’s important to ensure that I clarify when some communication is meant just for him, not for an audience/everyone to know. It’s important to tell your partner what is meant to be a private matter, and what is a public matter, and that they do the same, and when in doubt of the appropriateness, maybe don’t even begin the conversation.

So, we haven’t tested the limits of this yet, but it is important to have an open dialogue with all affected parties when you are planning mutual time off. Depending on when/how long it may be, you may need to plan extra ahead since the company may be out of two key figures (i.e. their “beer money” man and the totally-important-for-business-I-swear Director of Optimism) for an extended period of time while they are traversing the other Windy City this September, hypothetically.

Now that work and play have become so intertwined, it is important to also give yourselves time away from each other when needed. Separate hobbies become much more important, as do separate friends, and separate plans on occasion.

We know going into this that we couldn’t be doing the same job/department, because that was the hardest part in our previous working together experience. Since some of our duties do overlap, we ensure we aren’t stepping on toes by being as respectful and open as possible, to ensure there is true communication, and no assumptions are being made. We also made sure to not share desks, or even the same general workroom (he’s in the marketing trailer, I am at the front desk in the actual Production Facility building). 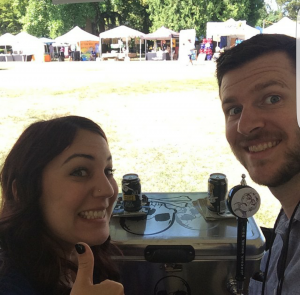 Working with your spouse is a very common practice. It’s not like we are re-inventing the wheel or braving some battle, nor does it require admiration or condolences that we work together. I hope if you are considering such a venture that you have the chance to consider all the aspects, have an open mind, and may have found our experience helpful. Things can turn out hunky dory for all involved. And if they don’t go well, just go into it with knowledge of who wants to keep with the company if one half were to leave, and who in the end is the handsome fabulous husband who can work anywhere and was convinced to join the “private sector” to enjoy the free beer. And butts.