But in 12 years of dating I’d never been on a double date with another couple until 2 weeks ago. Unless you count that time we were the only other people in the movie theater besides the mayor and his wife and the one other random guy who saw a rom com solo (which is totally OK in my books). But I don’t count that since we didn’t even share popcorn or a row with them. BTW we saw Kumail Nanjiani‘s “The Big Sick” and it was fantastic. Here’s a screenshot of my twitter conversation with @kumailn afterward. 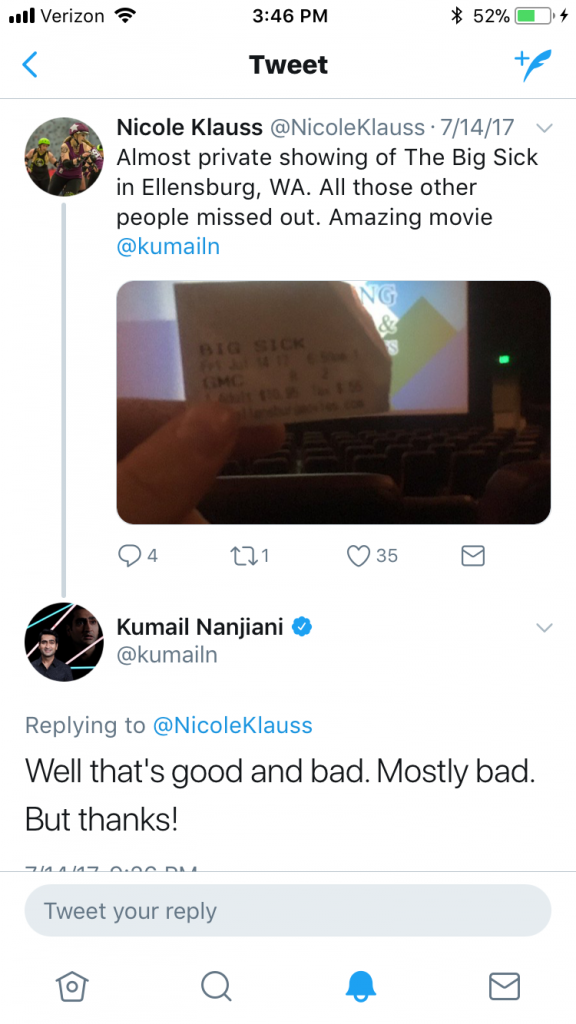 But back to the story of my double date with coworkers. I am not antisocial so over the years my current significant other and I have gone to group functions, spent time hanging out with roommates and also just spent time with each other’s friend groups. But nothing that qualified as a double date — you know, where you specifically decide to hang out with another couple over dinner and drinks and talk about super adult things.

Throughout my life there’s always been this dilemma where if my best friend had a boyfriend I was solo and then when I decided to date someone steadily my bestie was off doing her own thing again. So those natural double dates scenarios where you know everyone will have a good time never happened for me.

Fast forward to sometime in 2017. I don’t remember exactly how this whole double date thing got started. I imagine it was an exchange between my coworker and myself that went something like this:

“How was your weekend?”

“Cool, how was it? I love Roslyn too. That place is sooooo good.”

“It was rad. Roslyn’s just the coolest”

“We should all go grab a bite up there sometime or see a movie.” — honestly not sure who said it first.

Fast forward to a night drinking at [ the pub ]:

“Heyyyyy, we want to hang out with you and blah blah.”

“Let’s go see a movie at the Roslyn Theatre and eat at blah blah.”

“That sounds fun. When?”

“We have to check our schedules.”

If you’re only talking about it every time you and your coworker are a few beers in at company events or at the office you start to wonder if they’re genuinely interested in hanging out or if they’re just being polite.

Fast forward a few months later to another day at the office:

“Hey, we still need to go on that double date.”

“Yeah, so and so’s in. Looks like Star Wars is coming soon to theaters. Let’s see that.”

Finally all 4 people got their schedules to align. You wouldn’t think it’d be that difficult with 4 adults who don’t have kids, but it was a challenge.

So for our first double date — my first double date ever (this feels like a Dear Diary moment) — we grabbed dinner and saw Star Wars Episode VIII at the Roslyn Theatre. And we timed it so we didn’t have to talk to each other for all that long at dinner. Well played, **** and *****.  Jokes aside it was a fun time. At least I thought it was. Plus the Roslyn Theatre uses real butter in their popcorn so automatic win.

Will this blog scare off my coworkers? Perhaps. Will they invite us out again because they feel guilty now that I talked about how much fun I had? Maybe. Did my coworkers know I was writing this blog? Nope. But they’re late on their blogs so we’ll call it good.