I want to High Five you. But first I want to tell you about High Five Hefe.
Below is the press release.
Please read it, or don’t. Or do.
Either way, now, I high five you.

Extra bonus: Here’s a picture of the pilot cans, which are not the real cans, but the pretend cans with sharp edges that make your mouth bleed when you drink out of it. ET can’t fix that ouch. 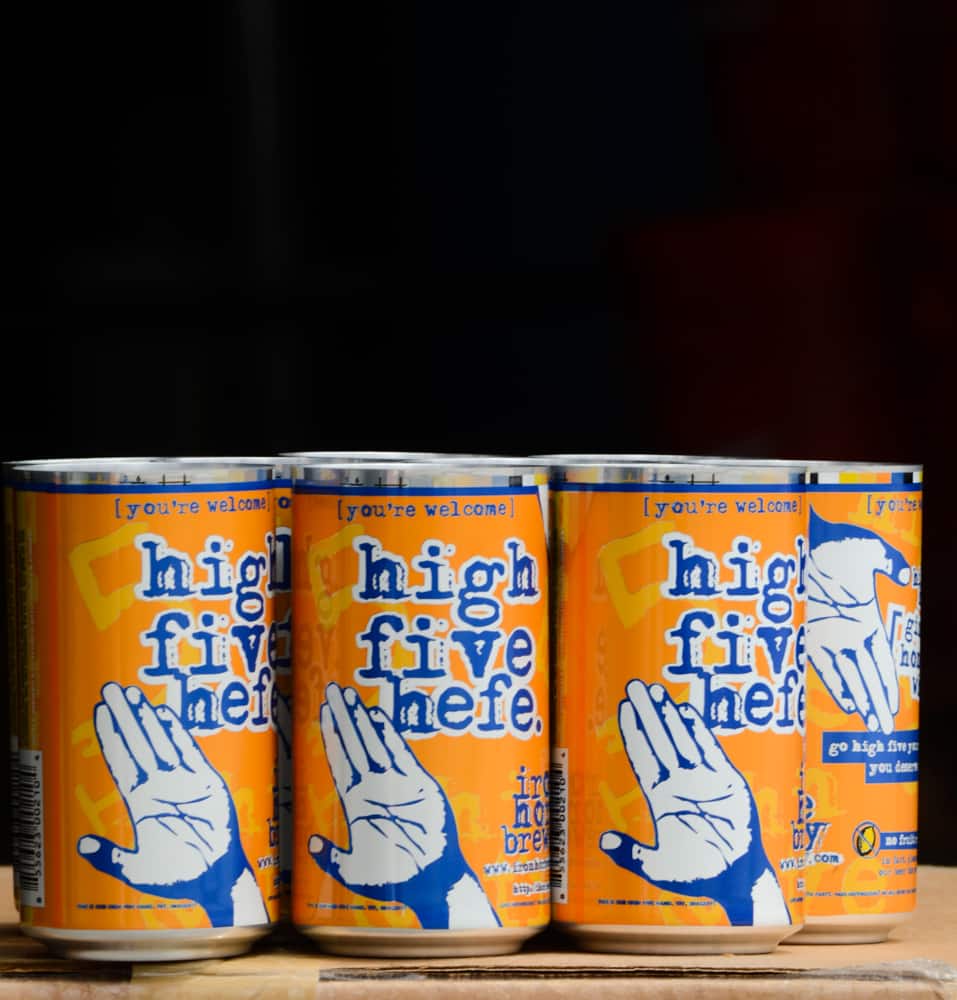 Iron Horse Brewery Announces Six Pack Cans of High Five Hefe
Go High Five Yourself, You Deserve it. Do it on June 12th.

ELLENSBURG, WA (May 15, 2014) Iron Horse Brewery is announcing that “yes, another brewery is going to put craft beer in a can, but do it, you know, differently.” June will mark the release of High Five Hefe as a six pack of 12oz cans, also known as a “sixer.” Brewed with ginger and locally sourced honey, High Five Hefe is a unique take on an American Wheat ale and will be one of the few craft wheat beers currently available in six-packs. “We know that the wheat segment is strong and continues to grow at a pretty steady pace, despite what IPA has to say about it. Even with the strength of the category, when it comes to being able to choose a quality craft wheat beer in a can from a small producer out of central Washington, in Kittitas county, on Vantage Hwy, the choices are really limited,” commented Iron Horse General Manager, Greg Parker. “People want wheat beer and we happen to have a wheat beer that’s unique & will satisfy their mouth parts,” added Parker.

Release and Availability
Iron horse will release the High Five Hefe six-packs the second week of June and will be available throughout Washington, Montana, some of Oregon, a lil’ bit of Idaho and Alaska. With the slogan “Go High Five Yourself, You Deserve it,” 12 oz cans of High Five Hefe is meant for the active, outdoor adventurist, the enthusiastic praiser or the personal space observer; all of which are deserving of a high five, and a beer.

Five Weeks of High Fiving for Goodness-es Sake
In conjunction with the launch of the High Five Hefe 6 packs, consumers will have the opportunity to support their favorite charity through the newly created website www.morehighfive.com In each 6 pack, there will be a sticker, token-thing that will direct consumers online where they can nominate (kinda like a virtual high five) their charity. At the end of 5 weeks, Iron Horse Brewery will give 5% of net proceeds to the top 5 nominated charities. “The high five is a way to engage with other people that immediately puts you in a good place,” said Director of Marketing Jared Vallejo. “We want to extend that feeling to High Five Hefe, the beer, and make it a way in which people can pass on the high five,” commented Vallejo. “Also less hugging, more high fiving,” Vallejo declared, very randomly.