I’ll admit it.
I like being part of something bigger than myself, probably because I am inherently selfish and need that bigger thing to keep my feet planted and ego in check. So, when it came time to start planning the second installment of the st. paddy day .5 k, we knew we wanted to go bigger. We thought “more people, more dollars raised, more pizza and less rain” in that order. The other thing I should admit is I hate routine, so the question I asked was how can we do what we did, but different and better (or worse), just not the same? The answer revealed itself pretty quickly. you.

yes, yes this a sappy post about you, the human.

You guys are crazy. 350 of you people showed up… For. A. .31 mile race. 68% of you came from out of town. what were you thinking?
That was the difference between last year and this year. We nearly doubled the participation. Your energy, your costumes, your showing up made the difference and better. Last year was great; this year was spectacular.

We had some pretty incredible businesses help out in various ways, specifically ShirtWorks – who donated almost all of the shirts by the way – so you should thank them by buying stuff.

I’m seriously mystified and an jealous of your willingness to participate in this weird idea. Because you did, this year we…eh you, raised
$5019 for FISH food bank. Feeding people just got a touch easier.

The other piece that makes this whole thing work is the spirit of trying something new.

At the end of the day, the time, effort and costs we incur pales in comparison to the cause because people need to eat and FISH helps fulfill that need. I fundamentally believe that businesses have a degree of responsibility over the well being of the community it lives in. Fortunately, there are a lot of others that feel the same way.

I, we, have a vision for this race, where for 2.5 hours, main street is shut down entirely, children are jumping on mattresses in the center of town, all of the businesses lining the street are engaged and participating in the race, music is blaring in the street, there is a 600 gallon pool filled with bugles, elephants and giraffes take people around the course, I’m pretty sure a marching band, a harpist and mimes are involved and when the event is complete, 800 of you runners just helped raise $10,000 dollars in that short time span. Wouldn’t that be cool?

Can we make that happen next year? I don’t know; We have a little work to do get all of downtown on board; but because of your turnout this year, the likelihood of realizing that vision gets that much closer. Oh, and if anyone has connection with general mills to lock down the bugles, let me know at omgbuglesaregood@ironhorsebrewery.com

Thanks for being rad and making it weird.

Oh and here’s an infographic for you, which you probably just skipped to, because, f%#k reading words. 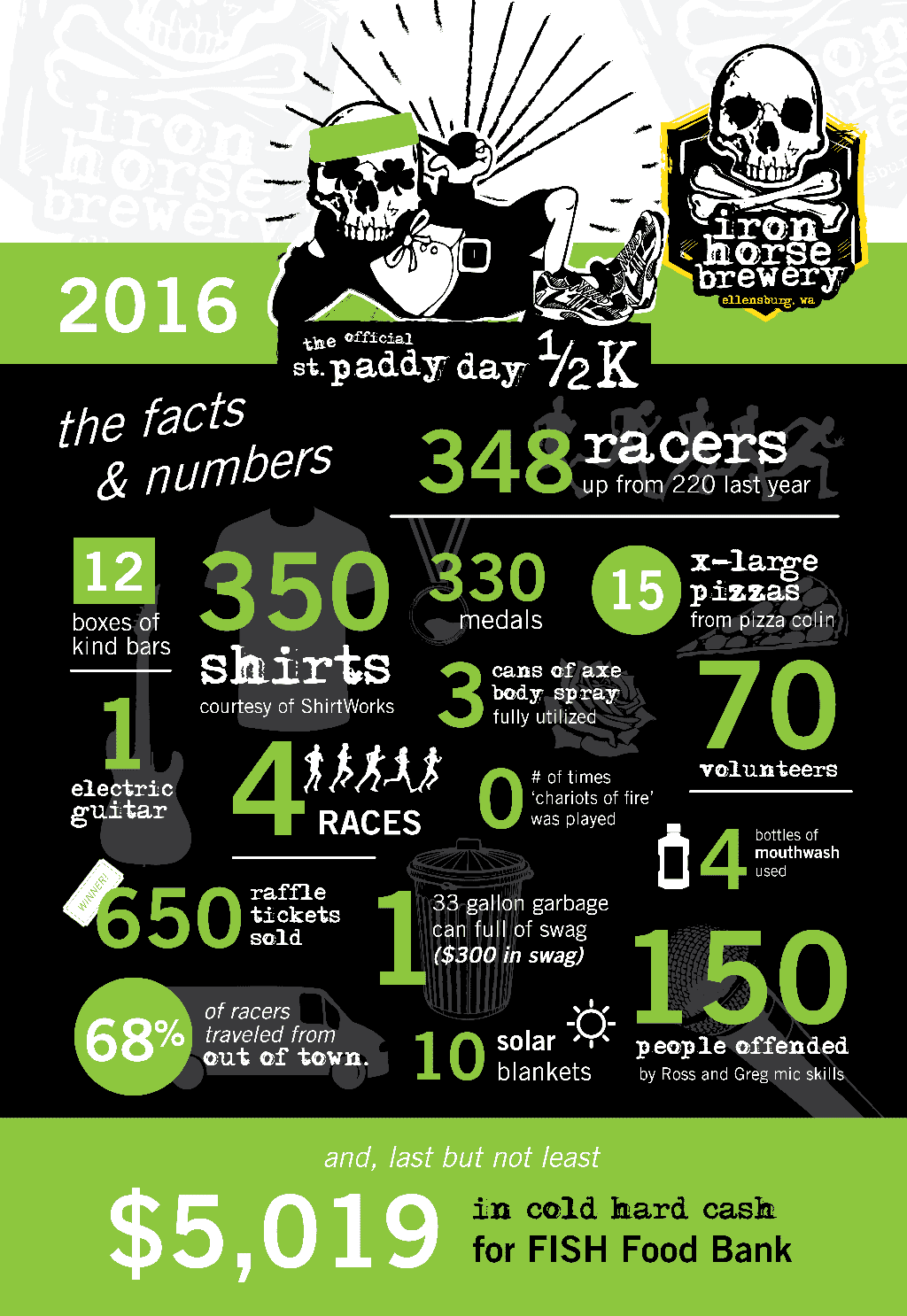