Exactly zero people are interested in this subject, which makes the point of this post worthless and probably one of your biggest wastes of time. After you finish reading this, you will come to the conclusion that you are less of a human being for having spent the 2.375 minutes it takes to read. You’re welcome for that.
Given that fact, here is my general thought flow when posting stuff on Facebook.

(open Facebook, look at time-wasting memes, ideate on how to mock them. ignore those ideas)

I should really promote the event that Ross is doing this week.

Gah. I hate just always promoting stuff; it feels so narcissistic. Of course that is the point of a Facebook page. How else would people learn about things if you don’t promote them.

We should just promote something random like “drink beer and also stop eating bald eagle meat”, because that’s funny and no one eats bald eagles. or do they?

(open new tab, go to google, not bing, because f*&^ bing specifically because of those Hulu commercials, look up phrase “do people eat bald eagles”, learn that people generally frown on this sort of thing and that even when clearly joking, people get quite offended. close tab)

Okay. So I’ll just write that Ross is doing an event and that he’ll give the first person to say “bald eagle meat is bad” a t-shirt.

I could just do what I normally do and write a bunch of words.

(get up, make some coffee, talk to whoever else is in the office, realize they don’t want to talk to me. go back to amazing pallet desk in the cave office)

Regan has a bunch of events. So does Lorne. It’s Cornhole tonight too..

Oh snap!. I got it. (I don’t really think “oh snap” in my head. I just thought some exaggeration was necessary to illustrate the point that I know what the post will be about.) 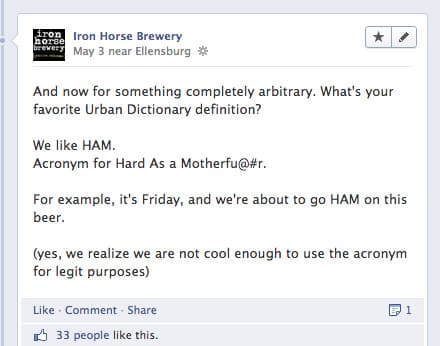 As you can see, my thought process is all over the place. Let me explain, briefly.

We make a very concerted effort to not “filter” ourselves at iron horse brewery. That doesn’t mean being rude or an A-Hole, but rather being truthful and direct in all aspects of our communication. I try to apply this same unfiltered approach when posting stuff on Facebook. Which is why working at Iron Horse Brewery is such treat, and I’d imagine pretty much any local craft brewery is similar; the culture is one of openness, directness, and playful sarcasm.

Also, I hate being boring. Sometimes writing facts like “Event at This Great Place at 6pm” bores me, which makes me think it probably bores you too, oh Facebook fan. (assuming you are fan of iron horse brewery on facebook. why wouldn’t you be?) So, when I do finally post something it usually follows a stream of consciousness that is only loosely tied to the matter at hand, but amuses me and may or may not contain information of any real value.

In conclusion, even though it may not seem like it, I take this one aspect of the job quite seriously. Probably too seriously, but I feel it’s important, since the average person spends 6-17 hours (desktop and mobile ) on Facebook per month, so the content should have at least some “interesting-ness” to it. At least that is what I tell myself when I re-read posts 447 times.

Next week’s blog post will introduce you to some new material we have coming out. Hint: you can put your beer in and on them.