The seasonal offerings are new formulations of water, malt and hops.

ELLENSBURG, WA  (June 24, 2015) Iron Horse Brewery is introducing two new handcrafted, locally made craft brews to the marketplace,  Koytus, a dutch-style koyt and Disruptor, a brand new beer style, they are calling IPA.  “Both of these beer styles are very rare, in fact, we believe we might have invented a new style,” said Greg Parker, owner and gm of Iron Horse Brewery.  “You won’t believe what happens when you put a boat load of hops in the boil, after the boil, and during fermentation.  You get this rich bitterness and floral aroma the world has never known until now.  This will disrupt your mind and senses; convenient pun intended,” commented Parker.

The Anniversary Ale – Disruptor IPA
As Iron Horse Brewery’s 9th anniversary ale, they wanted to do something completely different.

“We want to alter the taste buds of craft beer drinkers everywhere. We want to reimagine the craft beer market place, which is why we are pleased to introduce to the world, a one of a kind beer style, called IPA,” said Jared Vallejo, marketing director of Iron Horse Brewery. “Based upon a relatively unknown process called dry hopping, Disruptor IPA is an intricately produced, deliciously amazing beer with just the right bitterness,  staggering aroma and is built on a solid malt backbone, giving it balance throughout the beer drinking session,” commented Vallejo.

What’s a Dutch-style Kuit?
According to the Brewer’s Association guidelines, “Dutch-style Kuits (Kuyt, Koyt) are gold to copper colored ale. Chill haze and other haze is allowable. The overall aroma character of this beer is grain emphasized with a grainy-bready accent. The distinctive character comes from the use of minimum 45% oat malt, minimum 20% wheat malt and the remainder pale malt.”  According to Tyson Read, head brewer at Iron Horse Brewery, “Koyt – it’s a flavorfulass beer made with oat malt.  We increase hopping over traditional standards to bitter it up a tad.  That’s what it is.” 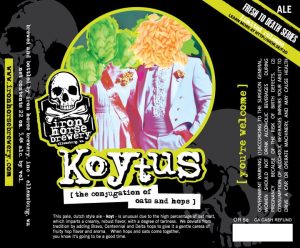 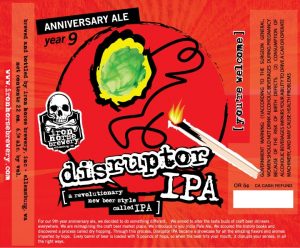 Name: Koytus
Style: Dutch Kuit/Koyt
ABV: 5.8%
IBU: 22
Hops: Bravo, Centennial, Delta
Package: 22oz Bottles
Other: made with 45% oat malt, hopped up a touch, clarified with a centrifuge, and hugged by a giant platypus.

Release and Availability
Both Koytus and Disruptor will hit the market in the beginning of July and will be available in Washington, Idaho, Montana, Alaska, and Oregon.The release has been in the works for at least 9 days with placement secured at several of the major chain grocery retailers as well as independent grocers and beer retailers. Consumers hoping to get their hands on either beer can use Iron Horse Brewery’s Beer finder for exact locations. The Beer Finder can be found here: http://ihor.se/beerfinder

About Iron Horse Brewery
Iron Horse Brewery, centrally located in Ellensburg, WA, has been producing hand crafted ales since 2007.  Iron Horse is owned by father-son team Greg and Gary Parker.   With 33 employees and a recent expansion, enabling IHB to double its brewing capacity, they plan to produced over 18,000 bbls in 2015. To learn more about the brewery or to simply take a break from really talkative co-worker go to www.ironhorsebrewery.com.